A journalism student at university and I feel like a complete idiot for never writing down my experiences and posting them on the big bad web for people to read. It’s not that what I have to say is overly important and that I’m in need of avid readers, but I’ve done a fair share of traveling and why not share that with y’all? It will at least force me to raid my brain for the good and bad points of roaming the world, and hopefully I’ll take note next time I decide to jet off into the unknown.

Six months I was away from home, but for three of those months I reverted back to twelve-year old Annika, living in Fairfield, CT with her cousins and watching all the people she grew up with morph into these adults with their own agendas, attending prestigious universities, joining sororities and living the life I may have been majorly apart of, had my family not decided to uproot and move down under. I really did love being back home, summer in America has a completely different feeling; it’s full of country clubs, traveling to summer towns and consuming cookie-dough ice cream at least twice a day. During that US summer of 2013, I sent myself into NYC as much as possible. It was like a test for me– I remembered the city well, but I had to be sure that it was still living up to my dreams and expectations that shows like Sex and the City and Friends set for me. I wasn’t the nine year old, walking around the blue crisp city at Christmas to see the Radio City Rockettes anymore. I had my own plan, my writing goals that loomed far into future careers that only publications like Vanity Fair or The New Yorker seemed capable of holding.

Lost in the radiating concrete-dense heat, down in Greenwich Village, Washington Square Park and past the NYU buildings, I felt nothing but nostalgia for the life I never got to live and imagining every possible way that I could broadcast myself into the version of the person I wanted so badly to be. I’d get home, start and finish my four-year double degree, saving as much money as possible– enough to to pay a year of graduate school studying at NYU and chasing down mean editors in the hopes of a pathetic freelance writing position.

These three months moved like the heat- slow. It wasn’t something that bothered me, it was something that was sort of required and I wasn’t even fully aware of it at the time. The god damn beauty of hindsight. I visited my parents in Boulder, Colorado and my mother was quick to remind me on a daily basis that I was nothing short of the yank I always had been, and to not be offended when all my Australian friends might not be able to afford an overseas wedding– Thanks for the reminder, Gillian.

I shouldn’t really be overly surprised that it wasn’t the familiarity that made me see clarity, it was the unknown. I’d done America, I’d lived and visited many times, so why I thought it was the answer to my future and all my problems really doesn’t make a whole lot of sense (I’m not really full of problems, but we all kind of act like we are, don’t we?).

The places I hadn’t seen, and didn’t even belong to, were calling my name. I traveled Europe for an abrupt three months (due to a lack of funding– whoops-a-fucking-daisies), and it wasn’t even until my plane landed back in Sydney that I understood the notion of the “travel bug”. While it was all happening– the rush to make flights, the extended bus trips, the constant expenses, they seemed like nothing but a downer on what was supposed to be a fulfilling experience. Hindsight, you motherfucker, I had the best three months of my life and only the last few weeks and the depressing arrival home allowed me to see this.

This is me, just over a year from now– leaving for everything I just told you about. 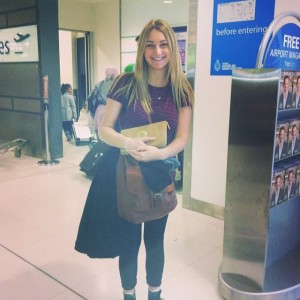 10 kgs lighter and terrified of saying goodbye to my Ma and Pa. So by looking at travel pamphlets, brochures from the Gucci museum and reading my extremely rushed and mediocre travel diary, I’m gonna reverse back the clock and write down anything and everything worth sharing– a pretty good excuse to relive it all, dontcha think?

Hey all! My name is Annika Tague and I’m currently enrolled to study a Bachelor of Journalism teamed with a Bachelor of International Studies starting this year at the University of Wollongong. I’m extremely passionate about plenty of silly things like, “Pulp Fiction”, mermaids and the order in which my books are placed on their shelf. One day, I would love to work for a magazine, newspaper or publishing house doing any possible type of writing or editing- that would have to be the dream, I'd say. Stay tuned for more. View all posts by annikatague